We start after a hearty breakfast. That's the one good thing about staying in restaurants. I fill my water bottles from the tap behind the counter and start walking. There's bad weather ahead once more, but I hope to make it to my destination before it can get ugly. I fear that the first real highlight, crossing the Birkkarspitze, with more than 2700 meters the highest mountain in the Karwendel region. The forecast predicts snow there tomorrow towards noon, and the steep, steel rope secured descent is not something one wants to do in slippery conditions and low visibility. But I still have a little hope that the weather may hold out a little longer.

The path goes constantly upwards along the slope that is always on my right shoulder. Soon I have gained quite a bit of elevation. 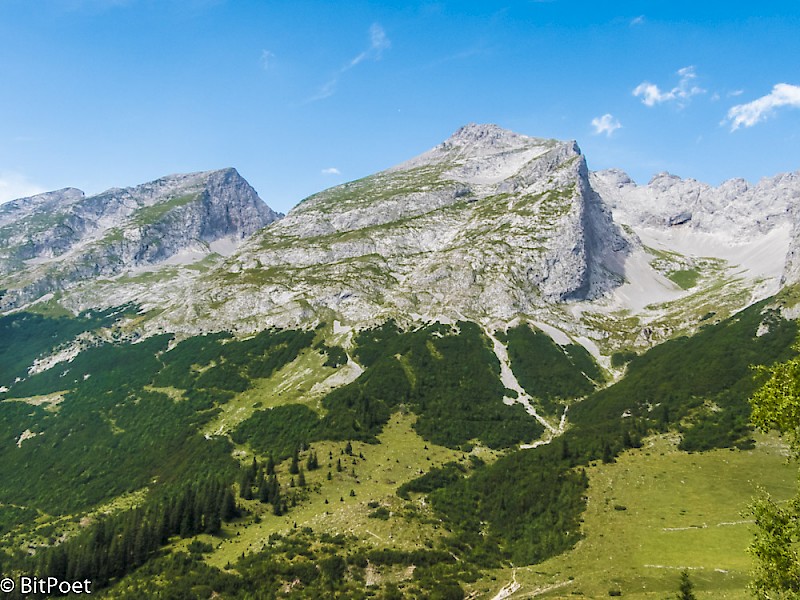 I walk across a large, flat plateau, the famous "Ahornboden" (maple plain), and soon the path is framed with huge rocks that appear to have been thrown there by giants. Which they were, the giants being huge glaciers that have completely vanished after the last small ice age. I meet a chatty school teacher from Munich and a few families with kids who spend a few days hiking in the Karwendel. It gets hot again when we near midday, and we're all happy when we turn a corner and see the first signs of the Karwendel hut, the outhouse with the generator and water equipment. 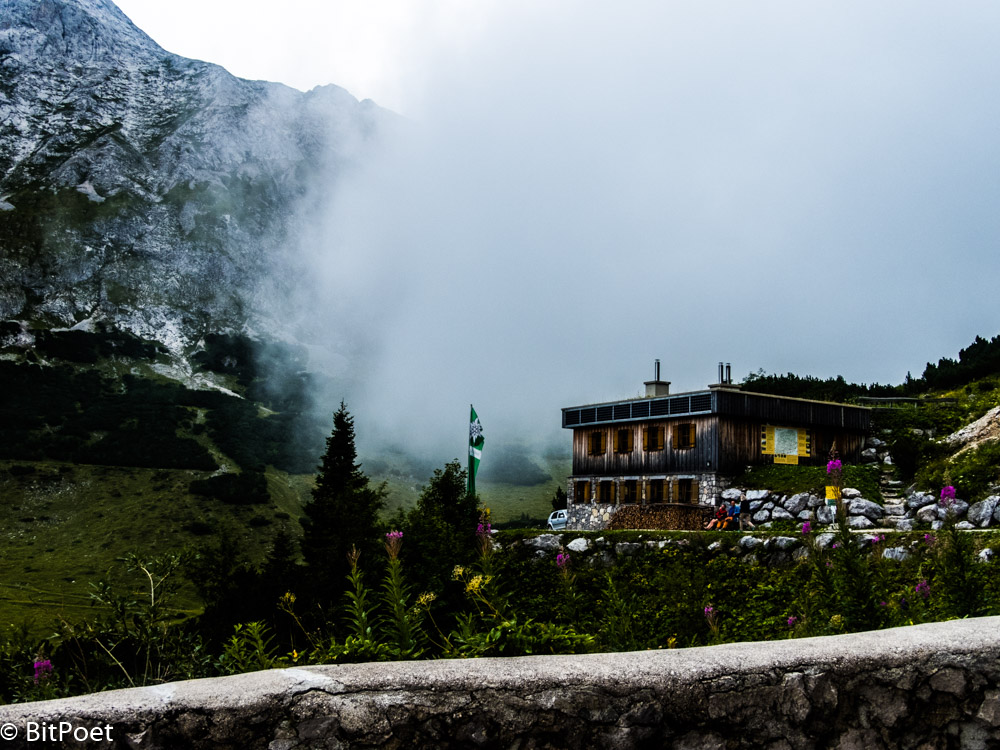 The Karwendelhaus is one of the biggest huts (it doesn't really deserve that name) in the northern Alps with 50 beds and 140 cots. It's filled to the brim, like almost every day in August, helped by the facts that there's a popular, official bycicle route there and that taxis are allowed to drive up to the hut. I get a cot in a rightly packed room on the middle floor. The waitresses appear stretched to their limits with the hubbub, and things don't get better when dinner time arrives. We're so tightly packed in the dining room that you couldn't fall over if you tried, especially since it started raining heavily around five.

I have pasta bolognese. It's not bad tasting, but it's far too huge a portion, even though I'm hungry like a bear. I manage to eat it all, which nearly gives me stomach cramps. But that's my fault.

Perhaps that fullness later contributes to my inability to sleep. I constantly have legs and elbows hit me, though, it's hot and there's nearly no oxygen. My roommates' snores make the walls shake. I head downstairs and try to step outside to cool down and get some fresh air, but the door is locked. So is the emergency exit through the drying room. Now I feel uneasy. The whole hut is hundred years old dry wood, and all the exists are locked. Even the two window I can access can't be opened without tools.

That's dangerous. Of course I don't even head back into the packed middle floor sleeping room with that knowledge. It's a long, long night.