It's another short day today. At breakfast I learn that I'm not the only one who divided their day trip into two. With me at the breakfast table is Monika, and she's also heading to Venice. We talk a bit about this and that regarding our trips after the landlady serves us our not so opulent meal. Well, the jam is good and there's coffee with caffeine, that's still nine out of ten.

I head out a little after her. The morning has lovely weather, and the first two kilometers wind through grassy meadows and past old trees. The soft ground there is a gift for my feet. 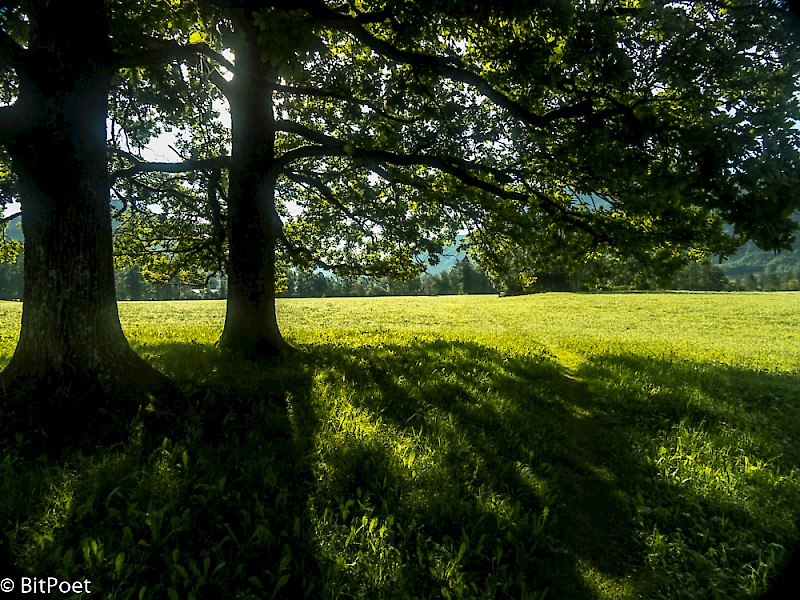 But all too soon the nice path crosses a bridge and joins a gravel road that roams up the hill, sometimes rather steeply. I walk slowly to not aggravate my feet more and don't meet a single soul for the next two hours.

There are a number of ramshackle wooden huts along the way which, in hindsight, I regret not photographing. After two hours and a little, the path evens out, and soon I arrive at the Lainer Alm, a small alp where they still make cheese the way they have been doing it for a few hundred years. Nowadays, the alp is mostly manned by holiday jobbers who do the cheese work and look after the cow herd comprised mostly of calves. The two girls on duty are really nice. I buy a small snack of freshly made cake, reach into my pocket to pull out my purse and freeze. I took my room key with me! I could have sworn I put it back into the lock, but that was apparently not what I did. 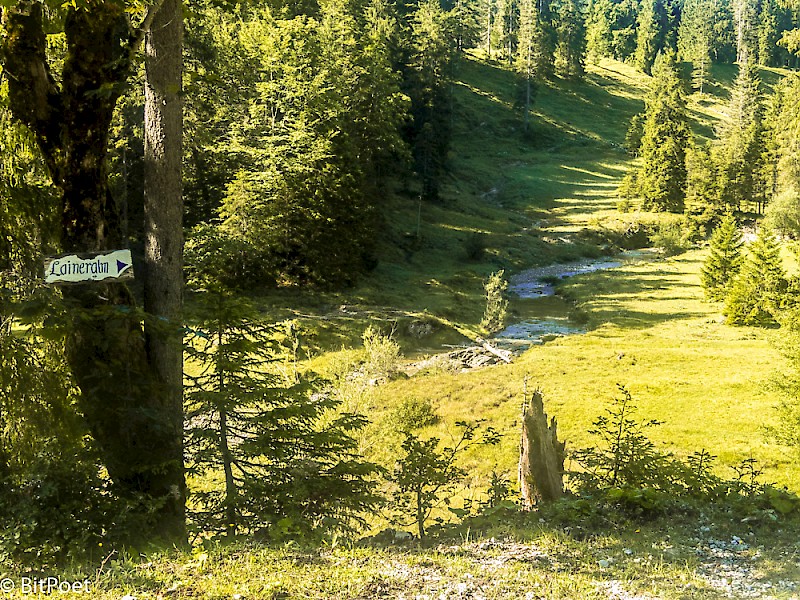 But that's what I love about people in the mountains. One of the girls, after hearing about my plight, saved me from spending at least three hours, probably more, of running back and forth and offered to carry the key back for me. On her bike! Would you offer a stranger to drive 6 kilometers and 600 meters of elevation down and back up again? I barely had words to express my gratefulness.

Soon after (hesitantly) departing from the Lainer Alm, I reached the saddle with an impressive view over the Risstal, a deep indentation between the mountains filled with a wide, curving bed of grit that massive floods assembled there. All kinds of butterflies and fire engine red beetles flutter around me, the latter making the strangest noises. I learn later that it's mating season for the shiny red beetles, that's why they rub their wing covers together while flying to attract females. I meet Monika again near the saddle, and we descend down into the Rissbach brook valley together. The path winds down a steep slope, and it would be easy to walk if it wasn't covered with freshly mown grass for large parts. That grass is hard and smooth and rather slippery, so we both pay attention to where we're stepping. 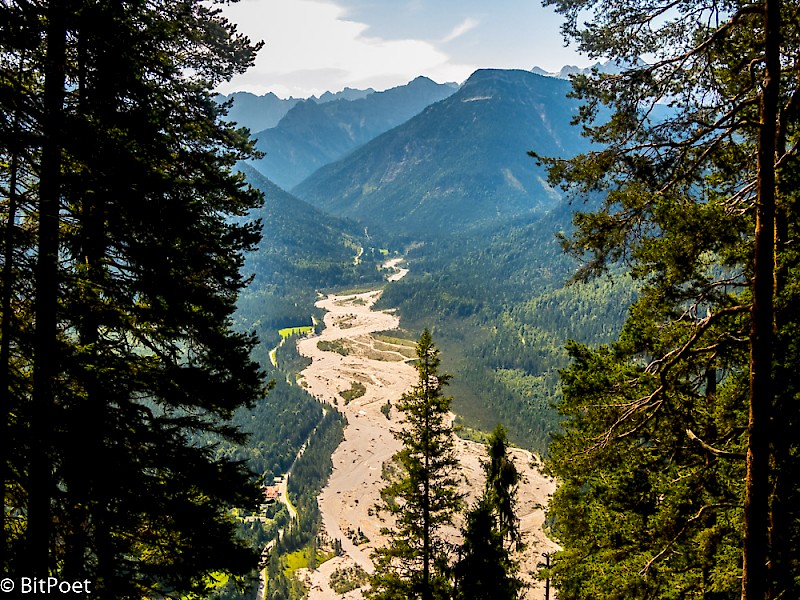 Half past twelve, we arrive in Vorderriss. There's a restaurant that also has sleeping accommodation, but to our luck it's their day off. We're both almost out of water and it's getting hot. There's not much else around here, just an old hay barn and a bus stop without a shelter. At least we can cool down our feet in the nearby brook before we decide how to continue.

The next bus towards our destination arrives and twenty to four, which is far too late with nothing to do here. We're also not fond of walking along the tarmac road where tourist cars race by without regard for anything around them. The taxi would have to drive here from a remote valley, that's why they'd want 120€ for a six kilometer stretch. We're lucky, though.

We alternate holding out our thumb in classic hitch-hiker manner, and five minutes later, a !taxi! stops. The driver is here to do some hiking on his own, and he doesn't let the chance to earn a little extra money slip. Twenty minutes and just as many euros later, we're in Hinterriss, where the restaurant already has beds reserved for us.

I set out my stuff on an overpriced bunk (these cheap, creaking camp beds) in the basement room of the Gasthof Post and take a very necessary shower. Dinner's really, really good.

In the dorm room, I meet Clemens, who also wants to hike to Venice. I'm not sure he will manage with a backpack that huge and already struggling with his own weight. He tells me a story about getting lost every day so far and sliding down steep slopes to end up on private property and nearly getting attacked. I worry for him, but he's old enough to decide for himself. This night, I definitely need my ear plugs.